Projecting companies with a high ROIC (quality measure) to continue on average is a flawed expectation. If use a quality metrics (ROIC) coupled with a value measure such as EV/EBIT the quality measure detracts from future returns compared to only the value metric EV/EBIT.  The magic formula uses ROIC and EV/EBIT in combination for rankings. The ROIC qualitymeasure detracts from the magic formula’s future returns.


Read more on the fascinating fully documented counterintuitive investment research in Deep Value. A must read and a personal favorite for deep value, contrarian investors.
Deep Value: Why Activist Investors and Other Contrarians Battle for Control of Losing Corporations; by Carlisle, Tobias

Support.com (SPRT $.69) is a simple deep value story. It’s a provider of cloud-based software and services for technology support. Its solutions include a SaaS-based Nexus Service Platform, mobile and desktop apps, and a scalable workforce of technology specialists.

The Q3 operations were not profitable as expected. During Q3 interim CEO Rick Bloom elected by the Board . There were several Q3 operational positives. Note the customer concentration risk. Q3 Comcast represented 60% of our total revenue and Office Depot represented 15%.

Two services wins launched as expected in Q3 2016.  First, Sears is a bundled offering with the Sears extended warranty to offer home hardware and tech support. This is a new offering to the marketplace, it will start small with subscriptions expected to grow. The second is target not named but announced on the July 2016 conference. Targets 'My Target Tech' transitioned to Support.com. Technology capabilities were an important differentiator in a competitive bid. SPRT offered deep retail ability and high quality service delivery. Two great retail names for the 2016 holiday season and potentially expanding programs in 2017.

The cloud product expects to exit 2016 with an annual recurring revenue run rate of between $1.1 million and $1.4 million. The total number of seats reported to-date has exceeded the high-end goal for 2016. 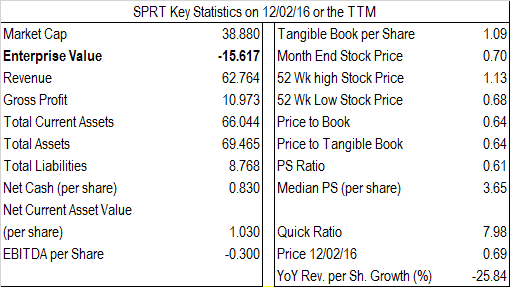